We don’t know how much you know about Zombies. I don’t mean the zombies in movies – that’s just a bunch of people getting the wrong end of the stick on all Zombies. Some Zombies are vicious and cruel and eat human brains, sure – that would be the Greys and the Greens. But there are other species of Zombies that don’t – like us, the Pink Zombies. We don’t eat humans, brains or otherwise, although we are omnivores. We much prefer lamb brains, although we’ll take sheep or cow brains, too. Or rhino or elephant or… Well, you get the idea. And apples. Definitely apples.

Us zombies tend to live in basements or out in the country where it’s safest for us where no one will try to kill us. You know, I blame all those movies and television shows like Van Helsing, Walking Dead, 28 Days Later, and Shaun of the Dead, although Shaun of the Dead started getting the right idea. Warm Bodies got it even closer.

But the point is, we don’t eat humans and we’re not intellectually impaired the way zombies are portrayed in popular culture. 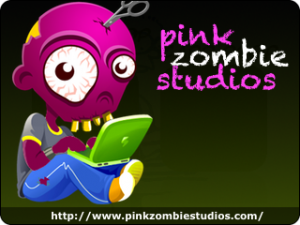 We can’t pass for humans, thanks to our inhuman pink hue, so we mostly stick to ourselves. And yes, it’s true, we mostly only go out at night, but that doesn’t make us vampires, either. Sheesh! Have you people never heard of night-shift workers?

And we’re a diverse group of people, too. A whole bunch of us are writers – not professionals, at least not yet, but we still enjoy writing short stories and novels and such. And a bunch like coding or graphic design. Or, well, interests as varied as humans.

Our crew consists of a whole bunch of Pink Zombies including Pinched Ear (he lost an ear in a fight with a Grey Zombie – Pinched Ear was protecting a human), One Foot (he lost a foot when escaping from a mob of angry humans), Gap Tooth (he lost a tooth when… well, I’m sure you can guess), Brain Cruncher from the programming department, Blaah and Oogh from QA (Quality Assurance – also known as bug testing and making sure our apps work properly), Eyeballer from marketing, and Leftie from accounting. There’s a bunch more, but these ones are the most vocal.

But man, that grocery bill sure is high…

You can find out more about which cookies we are using or switch them off in settings.

This website uses cookies so that we can provide you with the best user experience possible. Cookie information is stored in your browser and performs functions such as recognising you when you return to our website and helping our team to understand which sections of the website you find most interesting and useful.

Strictly Necessary Cookie should be enabled at all times so that we can save your preferences for cookie settings.

If you disable this cookie, we will not be able to save your preferences. This means that every time you visit this website you will need to enable or disable cookies again.